Okay kids, gather ‘round. I’m gonna weave ya a long yarn about a television station and the shows that they play. But these ain’t just no normal shows. Oh no, yuhsee this station actually plays good shows! Shows that are creative and experimental and most important of all… funny! An’ these good shows actually get good ratings! Sound too fantastic to believe? Well believe it sucka’, cuz weather or not you think that Adult Swim is annoying or juvenile or crappy, it’s flat out the best thing on TV.
And now that I magically get every channel known to man, I get to watch it every night. Here’s a “roundup” (yee haw!) of the shows featured on their Sunday night lineup. 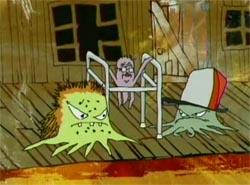 Squidbillies premiered on Sunday night, and I think it’s my new favorite show.

But before I get to that, let me speak about Adult Swim on more general terms. Terms that speak also about Squidbillies in particular. A big attraction to Adult Swim is just the spectacle of the fact that it was ever made at all. The sheer audacity of it being put on the air. You watch it and think “I am watching this on real TV. And so are thousands of other people. This is insane.” This of course is not the only attraction to Adult Swim. There is also the humor, the creativity, and the artwork. But the “What the fuck” factor is big. It is certainly the edgiest thing on mainstream television, as well as having the edgiest humor on television.
Well, there’s a new edge. And that edge is named Squidbillies. This show is completely insane. As the commercials say, the show is about “a family of squids who launch a daily assault on the niceties of country living.” Forget about the fact that these characters actually appear to be octopi. They drink, rob convenience stores, have illegitimate children, spend fifteen years in jail, get raised by wolves, throw Molotov cocktails… all in the first fifteen minute episode. And the dialogue is hilarious, if you’re fast enough to catch it.
And the artwork is probably the best to come out of Adult Swim yet. While the characters themselves look like they come out of a deranged fourteen year old’s notebook, the backgrounds are rich expressionistic paintings that look like they may have been painted in a shack in the middle of the woods by a very gifted but mentally deficient artist. And throughout all of this is Les Claypool-style (if not the man himself) wandering bass and vocal murmurings.
There is no true way to describe this show, but I highly suggest checking it out. If you see a squid humping a small yellow creature in a black mask, leave it on that channel for a few minutes. 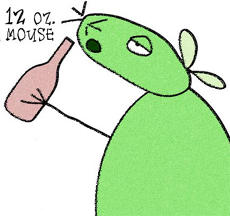 Phh. Okay. Describing some of these shows is proving to be tougher than I even thought. 12 Oz. Mouse is about a drunken mouse who drives a big yellow jet taxi. His sidekick is a small chinchilla, who really does nothing but vibrate and scream. He is given an assignment by a shark at a desk to pick up an important client… and then he robs a bank… and pukes on a woman at the bar… who transforms into a man to scare him away… and then it gets kinda weird.
This show is almost all shock value, as the animation appears to have been done rather hastily in MS Paint. The dialogue sounds a little… spontaneous (stoned- as lazy as I know it is to blame this stuff on drugs), as if they were improvising and laughing as they went along. Basically, this is the Most Extraordinary Space Investigations of Adult Swim.
Weather it is or not, and maybe this is an unenlightened thing for me to say, but it seems totally made-up and pasted together. You can come up with some great stuff that would never have happened otherwise that way, but for the most part it’s going to be pretty boring. The opening titles are quite good.

The old standard. Do I really need to tell anyone about this show? You either love it or you hate it. And if you don’t love it, then I hope you can sleep at night knowing I think you are a loser. More on this show at the wrap up.

TOM GOES TO THE MAYOR

This show isn’t as old as Aqua Teen or Sealab, but it’s older than Squidbillies and 12 oz. Mouse. And in many ways is the median between the two groups. It makes more sense then Squidbillies, but less then Sealab. It also focuses on one aspect of Adult Swim shows that I love, which is making a caricature out of the ridiculous methods that people have of communicating with one another.
The show stars Tom, who as the title suggests, goes to the mayor. He has a new idea for the mayor every week, weather it’s a history themed restaurant, an idea for a shirt, or an atrium for the town. He’s an honest guy who just wants to make his mark. So honest that he puts up with the insane man-child mayor, who doesn’t even remember Tom’s name each week he comes in.
It also doesn’t hurt that the show it made by Tim Heidecker and Eric Wareheim, whose Mr. Show circle of friends often guest star (Jack Black, Bob Odenkirk, and Sarah Silverman have all been on).
The animation is unorthodox. Barely moving pictures of people manipulated with a standard Photoshop filter. But it still qualifies as animation, and is interesting enough to hold its own.

So there’s a rundown of most of the shows that were on last Sunday. In a strange turn of events, I found myself enjoying Aqua Teen Hunger Force almost the least of all. I think the problem that Adult Swim is going to run into some day is that their own boundary pushing will not allow their shows to age well. Now that Squidbillies and 12 oz. Mouse have taken from what came before them and went even further with it, Aqua Teen Hunger Force seems almost tame by comparison. But, surprise surprise, Squidbillies and Aqua Teen are by the same creative team. And I think it’s going to be a long time before they are unable to top themselves.